So I have had a TRF 101 sitting around waiting to be completed for a few months.  It's been out for a while, and there is now the TRF 101W as well, though it's 200mm.  The biggest change is the front end in comparison to the F104 front end.

I was a little unsure on the new front end in that I was used to the parameters I could use to tune the F104 front end.  The TRF setup is a lot like the old F103 standard front end or an Associated "old school" front end.  About all you can really change is the camber, spring, and the amount of flex.

Tuesday I was headed up to the local track (fresh rug ..yeah!) for a little practice time, and I was waiting on parts for my other car.  The TRF just needed to be finished off, so I decided to bring it and get some time on the track.  The setup was pretty standard to what I have run on Tamiya link cars, possibly outside of angling the links which was not possible before.  The front of the link was all the way to the inside, the rear in the middle hole with the spring on the rear of the link.

As far as the front end, I set it for max camber just to see what that would do.  The car was lifting tires all over the place.  It really didn't want to traction roll too much, but it was losing drive off the corner.  The track was medium traction, so I knew it would only get worse.  I switched to the lesser camber setting and that was just right.

I also wanted to test what would happen with o rings under the upper suspension screws.  Potentially it could add some steering, or affect the feel of the car.  Using some soft clear o rings and setting the screws to put a moderate squeeze on the o rings, the car was less reactive, but at first I thought it lost some bite on the front end.  Going back to a "bolted down" front end definitely brought the reaction back, but not necessarily the steering.  I think I was thrown by the fact that it had a mellow steering feel.  The added flex has a little more steering, at least in the conditions at my track.

At the same time, I wasn't wholly satisfied with the the way the car was working.  Don't get me wrong, it was actually incredibly good for having been set on the track for the first time.  Lap times were right where they should be for F1.  I felt like I wanted to get between a solid front end and the soft o rings, so I replaced what I had with the hard black O rings that come with Tamiya kits.

Back on the track, this was just what I was looking for.  The steering was there and it was pretty easy to drive.  The lap times came consistently without pushing hard.

At the other end of the car, I just wanted to see what could be done with the links. Normally, the angled link is a bit more stable getting on the power but will help the car wrap the corner.  The car was very stable overall, so I thought straightening the link might help get the car through the corner a little more on power.

So with both ends of the link in the middle hole I went back out on the track.  Oddly enough, the car felt much the same getting on the power, but it did not get through the middle of the turn as it had before.  Straightening the link killed a lot of the wrap and didn't take away any rear grip.  This was somewhat contrary to what I had found on other cars, but I couldn't deny what this car was doing.  Most of the time straightening the link frees the car up, but in this case the angle link was better.

On the whole I was really impressed with the TRF101.  Right out of the box it felt as good as anything I have had on the track lately. Stable and easy to drive, I didn't feel like it would have needed much to be competitive in any situation.  One of my buddies came up and asked if it was as easy to drive as it looked, and I said "YEAH".  He was impressed with how smooth it looked and it drove just the way it looked.  I hadn't been sure what to expect, but it was a nice surprise.
Posted by robk at 9:08 PM No comments:

Didn't have a good time with the SP-1 at the Halloween Classic at The Gate in Cleveland OH.  Qualified 9th finished 10th.

Other than Bill Jeric's VBC, everything at the front was CRC.  I think a lot of that has to do with the CRC cars ability to steer without wanting to traction roll, at least most of the cars I saw.  The VBC car was pretty stable as well.

I went into the race with the same setup as I had the last time I was out there.  Traction was up as you may imagine.  Initially, the car had a lot of off power steering, but needed more on power.  Not a big problem.  One thing I was noticing, contact with boards was changing my trim.  If I touched a board it was making the steering go 7-8 clicks one way or the other. (note I replaced the ball cups on the steering links at this point)   I had the front suspension plate mounted direct to the chassis with 5mm spacers under the suspension arms.  I noticed the cams that set the width of the lower arms looked cock eyed.  Figuring that being raised off of the suspension plate, the arms could move, I instead raised the plate on the spacers and mounted the arms directly on the plate.  Everything should be fine, but when I went out for the first qualifier, the car felt broken.   It felt like when the foam on the steering wheel of your radio jams against the radio body and the wheel won't return (I DID check this LOL).  The car was actually good, but it was hard to determine exactly where it was going or how much to turn the wheel. 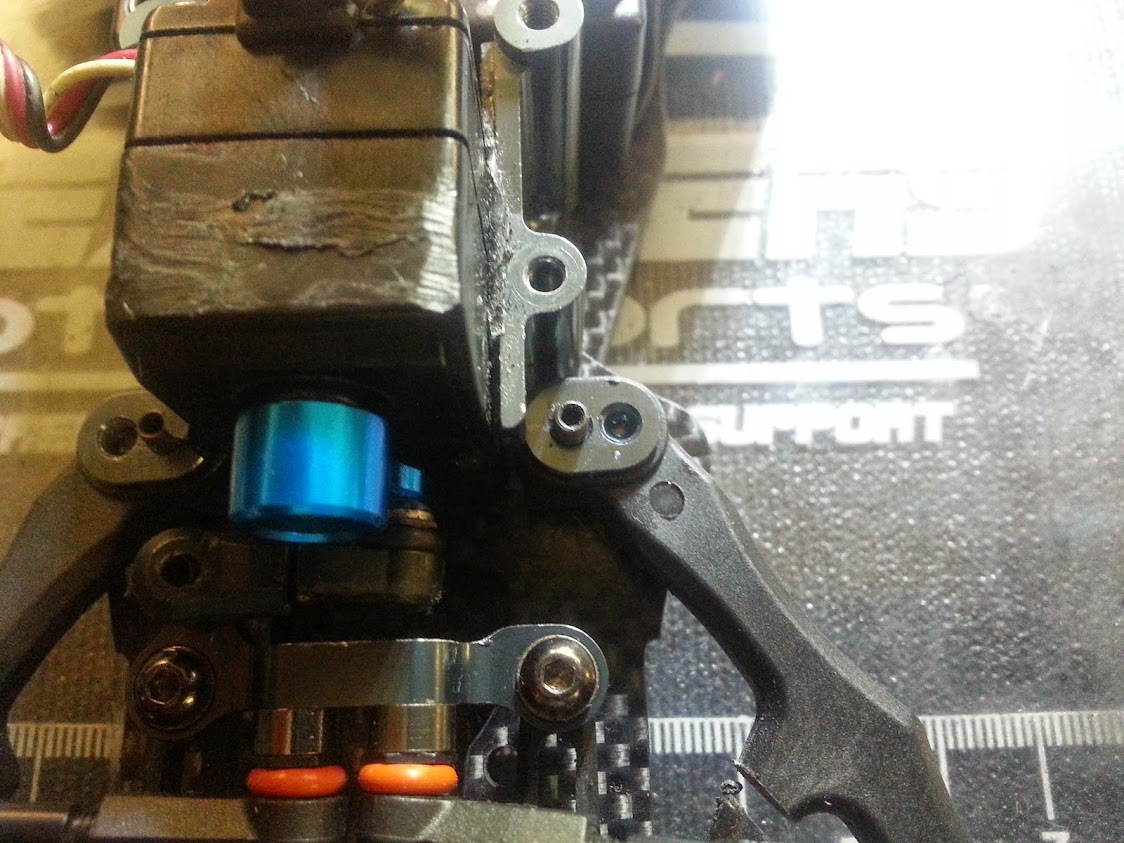 I did add a set screw in the unused hole on the cam to try to stabilize the arm by putting another point of contact there.  I'm not sure how much it helped.
Anyway, I rebuilt the front end, checked the football and links, etc. etc. Same thing next round!  Now I was really confused.  I went through everything again.  The only thing I could figure was maybe I needed more preload on the side springs?  I added preload, but I'm not sure if that cured it.  This time I had also flattened out the upper arms to try to make sure it would not tip, but it was just pushy.  Bleh.

Looking back, maybe something on the steering was touching during suspension travel, as was suggested by one of my friends.
In the final qualifier, I dropped that arm back down and added front droop. This helped but it was touchy.  Driving very easy, it was actually decent, but wanted to roll if pushed.  It was all for naught anyway as I had a crash and I popped off an upper arm.
In the main I set up the car with an Exotek upper am and Tamiya knuckle combo, mostly to ensure the front end would not break.  I didn't have enough new plastic with me to replace the front end parts.  6* caster and 1.5 camber.  Car drove ok, and I was fighting with the back end of the field until I crashed again...yay 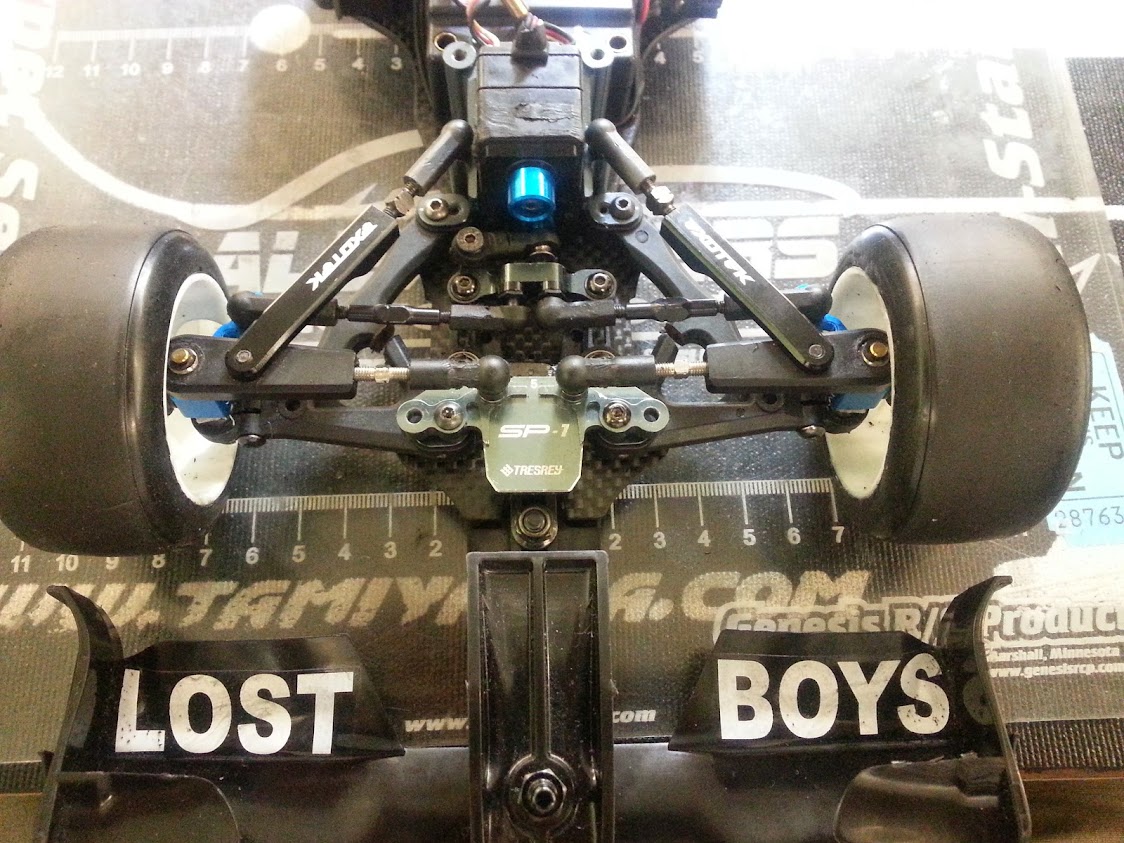 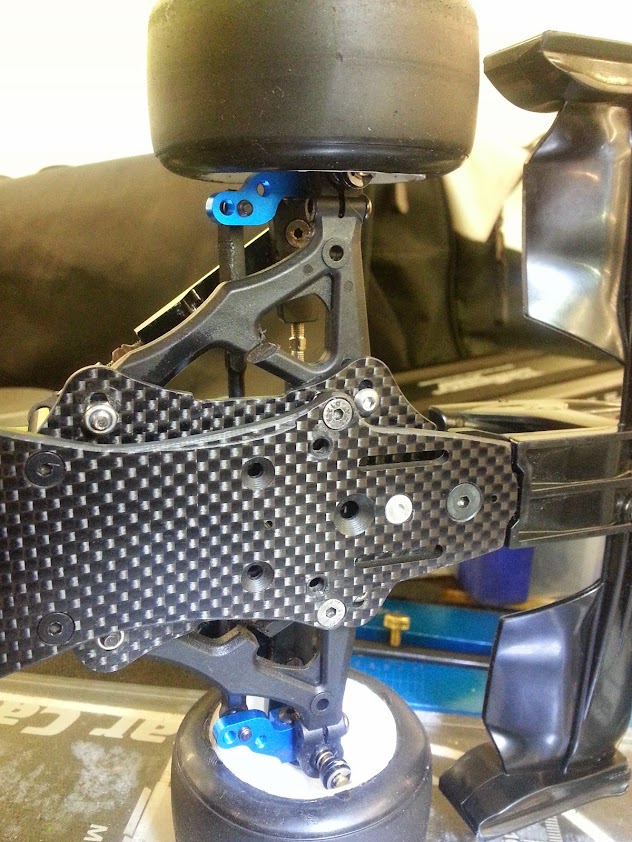 One mistake I think I made was being wide on the suspension links.  Looking at the CRC car, the links are extremely narrow, which upon reflection of the last few weeks, may be the way to go.  I think it brings more steering to the car by allowing the rear end to work with the front end.  Being wide on the links I think that may contribute to the lifting/traction roll by limiting travel.
Also, talking with a buddy he did bring up one interesting point among a lot of other things: a bunch of the 1/12 cars are moving the spring as far inboard as they can.  I have to look into this as far as how true it is but the theory is that it is working the spring more for the amount of pod movement.  Intriguing.
I am also looking at cutting a new front suspension plate with a hole to bolt the lower arm down with the unused hole near the  suspension ball.  Maybe this would keep the arm from moving in a crash and help with high traction stability.